Signifyin’ Works is a non-profit whose mission is to produce and distribute audio-visual material exploring the history and culture of African Americans.

It was founded in 1991 by Marlon Riggs. Currently the board of directors includes:

Signifyin’ Works is the 501c3 tax-exempt organization which Marlon created to produce his documentary films. Current contributions are used to promote his work and legacy around the world. Recent activities include: transfers of his films to state of the industry digital format; translations of his essays and some films into Spanish, Portuguese, Turkish, Farsi; and more. 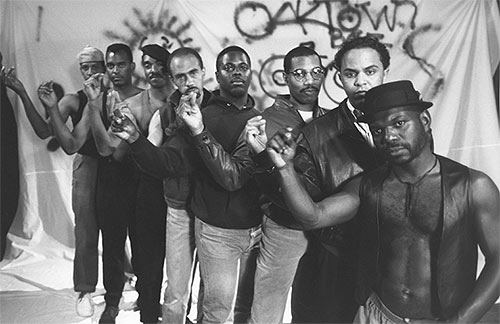 The UC Berkeley Graduate School of Journalism’s first endowed fellowships in documentary filmmaking are named for a pioneer: a professor who, toward the end of his life, would teach from his hospital bed by speaker phone; an alumnus who, by the time of his death at age 37, had confronted racism and homophobia with the challenging documentary films “Tongues Untied,” “Ethnic Notions,” and “Je Ne Regrette Rien (No Regrets).”

Marlon T. Riggs continues to inform and inspire our work at the J-School. Professor Jon Else calls Riggs “without a doubt the greatest documentary maker ever to emerge from the University of California, Berkeley.”

The fellowships are made possible by a $100,000 matching grant from Riggs’ Oakland-based production company, Signifyin’ Works. “Drawing inspiration from Harriet Tubman, Marlon dedicated his life to helping those enslaved to cross the river to freedom, and those silenced to find their voice,” says Vivian Kleiman, a filmmaker and Signifyin’ Works board member. “We are pleased to donate these matching funds to the School of Journalism to honor Marlon’s work.” Read More