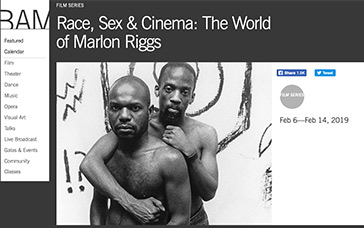 Thirty years after the release of Tongues Untied, Signifyin’ Works has launched an international celebration of this landmark film. Tongues Untied @30 is a yearlong extravaganza at venues large and small, highbrow and scrappy that will re-investigate and re-imagine the meaning of the film. An eclectic collection of events organized independently and presented across multiple platforms, Tongues Untied@30 will promote film screenings, installations, performances, colloquia, publications, and online hubs envisioned by scores of cultural institutions.

“Made to “shatter this nation’s brutalizing silence on matters of sexual and racial difference,” this bold and beautiful essay film combines poetry, performance, music, and montage into an at once personal and universal statement on the experiences of black gay men and the persecution they face. Met with a firestorm of controversy that reached all the way to Congress, Tongues Untied remains a radical act of representation.” — BAM film introduction.